On 26 April 2011 the UN International Law Commission (hereafter ILC) began its second reading of the draft Articles on the Responsibility of International Organizations for Internationally Wrongful Acts (hereafter DARIO). It is well-known that the ILC has been continuously confronted with a lack of clear practice since it began its study on the law of the responsibility of international organizations in 2002. As a result thereof, the Special Rapporteur has often been – mistakenly in our view – accused of yielding to the temptation to proceed on the basis of analogies with the 2001 Articles on the Responsibility of States for International Wrongful Act (hereafter ASR) [see for example, previous EJIL:Talk! Commentary here]. International organizations in particular have been among the most virulent protesters, as they have continuously emphasized the necessity to resist any overgeneralization informed by the ASR and the need to recognize the institutional diversity of the international society. Navigating amid these criticisms, the ILC, under the wise guidance of its Special Rapporteur, has nonetheless managed to adopt a first set of draft articles on first reading in 2009 which strikes a reasonably astute balance between institutional heterogeneity and the need for overarching secondary rules governing the responsibility of all institutional subjects of international law.

The DARIO and the ASR

Attribution of responsibility to a State and/or an international organization

Regarding the first issue, although the draft Articles on the acts of an international organization in connection with the act of a State seem to somewhat replicate the respective provisions of the ASR, it could be questioned whether an international organization may be implicated in the act of another subject of international law in the same way as a State. International financial institutions such as the International Monetary Fund (IMF) and World Bank have persistently objected to Article 13 on aid and assistance, arguing that financial assistance is one of their core functions and would never knowingly be given for wrongful purposes. Moreover, Article 16 has been particularly criticized for suggesting that an international organization could incur responsibility for merely recommending to a member to adopt certain behaviour. The provisions on attribution of responsibility to a State, included as a kind of appendix in a separate Part V of the DARIO, have generally been received more favourably. However, this does not mean that they do not require further modification, especially if one wants to address more properly situations in which members abuse the legal personality of an international organization (see here). Among the different draft Articles on attribution of responsibility to a State, Article 60 of the DARIO on the responsibility of a member seeking to avoid compliance certainly is the most controversial and probably one of the most confusing provision. The proposal by the Special Rapporteur to consider a revision of this provision (see here) is surely to be welcome. In our view, in its current form, this provision appears to operate as a secondary rule but seeks to fulfill the functions of a primary rule; and all of this under the guise of some specific regional case-law which, to a large extent, is alien to that matter. If counteracting circumvention strategies by States remains the ambition of the Commission, formulating such a provision as a primary obligation should be seriously reconsidered.

The “rules of the organization”

Tt is hoped that the ILC will use the unique opportunity provided by the second reading of the DARIO to revisit the whole set of articles comprehensively, and, in particular, in light of the two abovementioned cross-cutting issues. Yet, it is far from certain that the ILC and its Special Rapporteur are ready to follow this direction, especially on the eve of some significant changes in the Commission’s composition. In fact, despite constructive criticisms and suggestions by States, international organizations as well as legal scholars on these issues, the Special Rapporteur, in his Eighth Report (see here), does not seem to envisage a critical reappraisal of the DARIO as a whole. Only four provisions of the total 66 DARIO are said to necessitate textual changes (Articles 2 (c), 16, 39 and 60), while other critical comments rather be addressed in the ILC Commentary. As currently planned by the Special Rapporteur, the second reading of the DARIO may therefore rather turn out to be a fine-tuning exercise – a further distinguishing factor from the ASR, which have undergone substantive revision from 1996 to 2001. Following the presentation of the Special Rapporteur’s Eighth Report in Geneva this week, other ILC members have expressed somewhat mixed opinions: While the majority of the ILC seems to be in favour of finalizing the second reading of the DARIO in 2011, several members, drawing on the lingering fundamental divergences pertaining to a number of provisions, have already called for a more cautious approach and the need not to hasten completion in the current session. Whilst the work of the Special Rapporteur has been most illuminating so far, it is hoped that the second reading of the DARIO will be taken seriously and that the ILC will seize upon this opportunity to more critically reflect upon the – not yet satisfactory result – of its first reading. 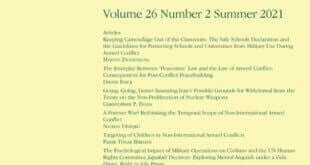