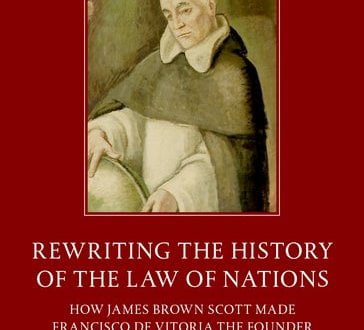 Rewriting the History of the Law of Nations 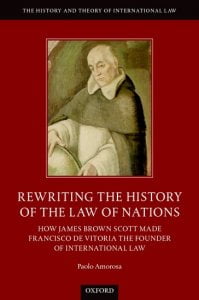 Rewriting the History of the Law of Nations

In the interwar years, international lawyer James Brown Scott wrote a series of works on the history of his discipline. He made the case that the foundation of modern international law rested not, as most assumed, with the seventeenth-century Dutch thinker Hugo Grotius, but with sixteenth-century Spanish theologian Francisco de Vitoria. Far from being an antiquarian assertion, the Spanish origin narrative placed the inception of international law in the context of the discovery of America, rather than in the European wars of religion. The recognition of equal rights to the American natives by Vitoria was the pedigree on which Scott built a progressive international law, responsive to the rise of the United States as the leading global power and developments in international organization such as the creation of the League of Nations.

This book describes the Spanish origin project in context, relying on Scott’s biography, changes in the self-understanding of the international legal profession, as well as on larger social and political trends in US and global history. Keeping in mind Vitoria’s persisting role as a key figure in the canon of international legal history, the book sheds light on the contingency of shared assumptions about the discipline and their unspoken implications. The legacy of the international law Scott developed for the American century is still with the profession today, in the shape of the normalization and de-politicization of rights language and of key concepts like equality and rule of law.

Paolo Amorosa is a Post-Doctoral Researcher at the Centre of Excellence in Law, Identity and the European Narratives at the University of Helsinki. Between 2012 and 2016 he was a fellow at the Erik Castren Institute of International Law and Human Rights, within the Academy of Finland project ‘History of International Law: Religion and Empire’. He obtained a Doctor of Laws degree from the Law Faculty of the University of Helsinki in 2018. He co-edited International Law and Religion: Historical and Contemporary Perspectives (OUP, 2017). His main research interests lie in the history of international law, human rights, and European integration.