There is little disagreement over the United Nations goal of eliminating dire poverty, but there is plenty of criticism about how leaders are going about it.

UNITED NATIONS — For all the bitter debates pitting nations against one another, there is conspicuously little disagreement over the United Nations goal of eliminating dire poverty. Virtually none of the countries that signed onto the endeavor in 2000 faults the idea of eradicating hunger, educating children, improving maternal health or combating disease. It would be like opposing mother’s milk. 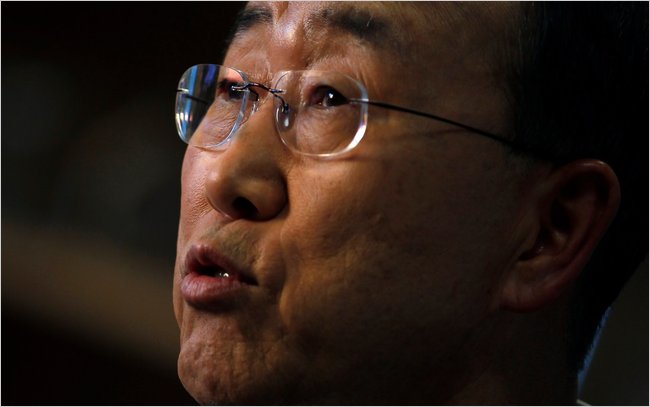 Secretary General Ban Ki-moon of the United Nations says he hopes to get new monetary commitments at a development meeting.

But there is plenty of criticism about how the world’s leaders are going about it.

Some lament the absence of a real action plan. Others fault the richest governments, and the Obama administration in particular, for what they say is mere lip service to the goals without spending the money needed. But perhaps most salient of all is a simple question, one that boils down to accountability.

“If we miss the goals, who is going to punish us?” asked Esther Duflo, a development expert at M.I.T. “Nobody is going to come from Mars and say, ‘You didn’t reach the goals, so we will invade’ — there is no onus.”

Before the annual jamboree of speeches coming to the United Nations General Assembly this week, about 140 leaders are expected to sign off on a new agreement recommitting themselves to reaching the original development targets and goals, known collectively as the Millennium Development Goals, by 2015. They vary from empowering women to ensuring environmental sustainability.

Any progress is widely welcomed, of course, but experts warn that even those achievements may disguise the fact that some of the poorest countries are making considerably less headway, or even becoming worse off.

Because the goals concentrate on global averages, China skews the statistics on earnings because its roaring economy has lifted millions out of poverty since 1990, the baseline year on which all the goals are set.

Looking at nations individually makes for a much more complicated portrait. In Nigeria, the ranks of people living on less than $1.25 a day jumped to 77 percent of the population in 2008 from 49 percent in 1990, for example, while in Ethiopia it was reduced to 16 percent from 60 percent, according to a new report from the Overseas Development Institute, a British research group.

Similarly, Ghana cut hunger by 75 percent by 2004, but the problem more than doubled in the Democratic Republic of Congo in the same period.

Experts delving into why about 22,000 young children die around the world each day point out that even looking at nations as a whole is too simplistic. In northern Nigeria, about 220 children under the age of 5 die for every 1,000 born, or roughly one in four, according to a new report by Unicef. In southern Nigeria, the number is nearly three times lower, about 80 per 1,000 births.

“Progress always starts with the people who are easiest to reach,” said Rudolf Knippenberg, a principal health adviser at Unicef, suggesting like many experts that the United Nations goals had generally not been met because they focused more on numerical averages than on the most destitute.

“The best way to pursue the goals is to start with the most difficult people,” Mr. Knippenberg said. “You have to take the lower 50 to 60 percent of the population. The groups reached last are the groups with the highest number of deaths.”

Many experts place blame for such disparities on the lack of a blueprint. Like most United Nations documents, the latest agreement involved weeks of wrangling. For example, Syria wanted to insert five mentions of Israeli occupation of the West Bank and Gaza Strip since 1967 having seriously slowed Palestinian development there, diplomats said, which the United States sought to block. In the end, one paragraph referred to it in a generic manner.

“There is no plan of action to complement what will be agreed upon,” said Jeffrey Sachs, the Columbia University economist who, as the special adviser to the United Nations secretary general on the goals, serves as the chief global cheerleader for them. “There is a difference between lurching forward on good intentions and a range of unconnected initiatives versus having a high priority plan.”

Mr. Sachs is particularly scathing about the lack of new aid money from the Obama administration to meet the goals, accusing the president of promising as a candidate to make the goals American policy and basically ignoring them ever since.

“To spend $100 billion on Afghanistan this year and at the outside $10 billion for 800 million people in Africa is a serious foreign policy mistake,” Mr. Sachs said.

Susan E. Rice, the American ambassador to the United Nations, defended the administration’s record, saying that President Obama was attending the summit meeting to underscore his commitment to the goals. She also noted that in 2009 his administration pledged $63 billion to a six-year global health initiative and $3.5 billion to bolster food security.

But like all such pledges, experts noted, development math is fuzzy. The $63 billion includes $32 billion already spent since 2008, according to American officials. The agriculture aid has yet to be delivered.

Beyond that, the latest document before the leaders calls for nations to spend 70 cents out of every $100 generated by economic activity on aid by 2015, a target only five Northern European countries now meet. But the United States has never subscribed to that target, Ms. Rice noted. It traditionally spends the most in total, but its annual percentage stays around 20 cents or less per $100 generated.

Ban Ki-moon, the secretary general, said he hoped to get new commitments of up to $45 billion during the development summit meeting that will fill the three days before the United Nations General Assembly starts Thursday. He especially expects to announce new money to combat child and maternal mortality, where progress toward to the goal is particularly slow. The French and Japanese are also pushing a world financial transaction tax that would finance aid, but given American opposition it is likely stillborn.

The development goals have proved useful to focus on the problems of the poor, experts say, but even though the United Nations trumpets them, they have failed to capture the imagination of the public globally.

The goals serve as a useful wish list for what everyone on the planet should have access to for a decent life, said Ms. Duflo of M.I.T., but the glaring hole is the absence of information about why they work in some places and not in others.

There are health services in northern Nigeria, she noted, that should help cut the number of children dying, but the people there do not seem to like or use them very much. “We don’t understand what works,” she said. “We all made the goals and said, ‘Let us get there,’ without asking what we really know about how to get there.”