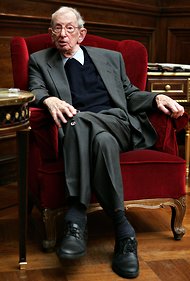 Eric J. Hobsbawm, whose three-volume economic history of the rise of industrial capitalism established him as Britain’s pre-eminent Marxist historian, died on Monday in London. He was 95.

The cause was pneumonia, said his daughter, Julia Hobsbawm.

Mr. Hobsbawm, the leading light in a group of historians within the British Communist Party that included Christopher Hill, E. P. Thompson and Raymond Williams, helped recast the traditional understanding of history as a series of great events orchestrated by great men. Instead, he focused on labor movements in the 19th century and what he called the “pre-political” resistance of bandits, millenarians and urban rioters in early capitalist societies.

“Eric J. Hobsbawm was a brilliant historian in the great English tradition of narrative history,” Tony Judt, a professor of history at New York University, wrote in an e-mail in 2008, two years before he died. “On everything he touched he wrote much better, had usually read much more, and had a broader and subtler understanding than his more fashionable emulators. If he had not been a lifelong Communist he would be remembered simply as one of the great historians of the 20th century.”

Unlike many of his comrades, Mr. Hobsbawm, who lived in London, stuck with the Communist Party after the Soviet Union crushed the Hungarian uprising in 1956 and the Czech reform movement in 1968. He eventually let his party membership lapse about the time the Berlin Wall fell and the Eastern bloc disintegrated in 1989.

“I didn’t want to break with the tradition that was my life and with what I thought when I first got into it,” he told The New York Times in 2003. “I still think it was a great cause, the emancipation of humanity. Maybe we got into it the wrong way, maybe we backed the wrong horse, but you have to be in that race, or else human life isn’t worth living.”

Eric John Hobsbawm was born in 1917 in Alexandria, Egypt, where a confused clerk at the British consulate misspelled the last name of his father, Leopold Percy Hobsbaum, an unsuccessful merchant from the East End of London. His mother, Nelly Grün, was Austrian, and after World War I ended, the family, which was Jewish, settled in Vienna. The Hobsbawms were struggling to make ends meet when, in 1929, Eric’s father dropped dead on his own doorstep, probably of a heart attack. Two years later Nelly died of lung disease, and her son was shipped off to live with relatives in Berlin.

In the waning months of the Weimar Republic, Mr. Hobsbawm, a gifted student, became a passionate Communist and a true believer in the Bolshevik Revolution. “The dream of the October Revolution is still there somewhere inside me, as deleted texts are still waiting to be recovered by experts, somewhere on the hard disks of computers,” he wrote in “Interesting Times,” a memoir published in 2003.

Mr. Hobsbawm, a cool introvert, found exhilaration and fellowship in the radical politics of the street in Germany. As a member of a Communist student organization, he slipped party fliers under apartment doors in the weeks after Hitler’s appointment as chancellor and at one point concealed an illegal duplicating machine under his bed. Within weeks, however, he was sent to Britain to live with yet another set of relatives.

Forbidden by his uncle to join either the Communist Party or the Labour Party (which Mr. Hobsbawm hoped to subvert from within), he concentrated on his studies at St. Marylebone Grammar School in London and won a scholarship to Cambridge. There he joined the Communist Party in 1936, edited the weekly journal Granta and accepted an invitation to joint the elite, informal society of intellectuals known as the Apostles.

“It was an invitation that hardly any Cambridge undergraduate was likely to refuse, since even revolutionaries like to be in a suitable tradition,” he wrote in “Interesting Times.” He described himself as a “Tory communist,” unsympathetic to the politics of personal liberation that marked the 1960s.

Mr. Hobsbawm graduated from King’s College with highest honors in 1939 and went on to earn a master’s degree in 1942 and a doctorate in 1951, writing his dissertation on the Fabian Society. In 1943 he married Muriel Seaman, a civil servant and fellow Communist. That marriage ended in divorce in 1950. In 1962 he married Marlene Schwarz, who survives him. In addition to his daughter, he is survived by his son Andrew; another son, Joss Bennathan; seven grandchildren; and one great-grandchild.

Mr. Hobsbawm served in the British Army from 1939 to 1946, a period he later called the most unhappy of his life. Excluded from any meaningful job by his politics, he languished on the sidelines in Britain as others waged the great armed struggle against fascism. “I did nothing of significance in it,” he wrote of the war, “and was not asked to.”

He began teaching history at Birkbeck College in the University of London in 1947, and from 1949 to 1955 he was a history fellow at King’s College.

Mr. Hobsbawm and his colleagues in the Historians’ Study Group of the Communist Party established labor history as an important field of study and in 1952 created an influential journal, Past and Present, as a home base.

The rich dividends from this new approach to writing history were apparent in works like “Primitive Rebels: Studies in Archaic Forms of Social Movement in the 19th and 20th Centuries,” “Laboring Men: Studies in the History of Labor” and “Industry and Empire,” the companion volume to Christopher Hill’s “Reformation to Industrial Revolution.”

During this period, Mr. Hobsbawm also wrote jazz criticism for The New Statesman and Nation under the pseudonym Francis Newton, a sly reference to the jazz trumpeter Frankie Newton, an avowed Communist. His jazz writing led to a book, “The Jazz Scene,” published in 1959.

If his political allegiances stymied his professional advancement, as he argued in his memoir, honors and recognition eventually came his way. At the University of London, he was finally promoted to a readership in 1959 and was named professor of economic and social history in 1970. After retiring in 1982 he taught at Stanford University, the Massachusetts Institute of Technology, Cornell University and the New School for Social Research in Manhattan.

The accolades for works like his “Age of” trilogy led to membership in learned societies and honorary degrees, but to the end of his life the Communist militant coexisted uneasily with the professional historian.

Not until his 80s, in “The Age of Extremes,” did Mr. Hobsbawm dare turn to the century whose horrific events had shaped his politics. The book was an anguished reckoning with a period he had avoided as a historian because, as he wrote in his memoir, “given the strong official Party and Soviet views about the 20th century, one could not write about anything later than 1917 without the strong likelihood of being denounced as a political heretic.”

Mr. Hobsbawm continued to write well into his 90s, appearing frequently in The New York Review of Books and other periodicals. His “How to Change the World: Tales of Marx and Marxism” was published last year, and “Fractured Times,” a collection of essays on 20th-century culture and society, is scheduled to be published by Little, Brown in Britain in March 2013.

Although increasingly on the defensive, and quite willing to say that the great Communist experiment had not only failed but had been doomed from the start, Mr. Hobsbawm refused to recant or, many critics complained, to face up to the human misery it had created. “Historical understanding is what I’m after, not agreement, approval, or sympathy,” he wrote in his memoir.

In 1994, he shocked viewers when, in an interview with Michael Ignatieff on the BBC, he said that the deaths of millions of Soviet citizens under Stalin would have been worth it if a genuine Communist society had been the result.

This article has been revised to reflect the following correction:

An earlier version of the obituary of the historian Eric J. Hobsbawm rendered his name incorrectly in several passages. It is not Hobsbawn or Hobsbaum.