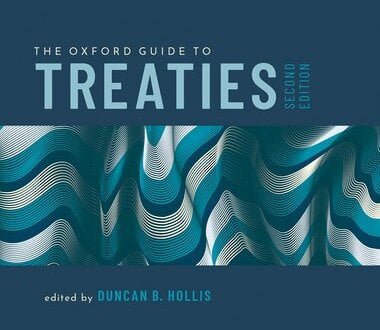 The Oxford Guide to Treaties 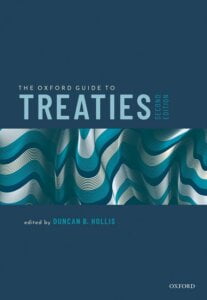 The Oxford Guide to Treaties

Edited by Duncan B. Hollis

This second edition of the award-winning volume from Professor Duncan B. Hollis provides a comprehensive guide to treaties, shedding light on the rules and practices surrounding the making, interpretation, and operation of these instruments. Foundational issues are covered, from defining treaties and their alternatives, to examining current theorizations about the treaty in international law. Chapters review specific stages in the treaty’s life-cycle, including formation, application, interpretation, and exit. Special issues associated with treaties involving the European Union and other international organizations are also included. A section sampling over four hundred actual treaty clauses complements these scholarly treatments. These real examples help illustrate different approaches treaty-makers can take on topics such as entry into force, languages, reservations, and amendments.

Duncan B. Hollis is Laura H. Carnell Professor of Law at Temple University’s Beasley School of Law, a non-resident fellow at the Carnegie Endowment for International Peace, and an elected member of the OAS Inter-American Juridical Committee and the American Law Institute. He is the editor (with Allen Weiner) of one of the leading U.S. textbooks, International Law (7th ed. 2018) and he co-edited and co-authored National Treaty Law & Practice (2005), which surveyed nineteen States’ law and practice involving treaties. Prior to joining the Temple faculty, Professor Hollis served from 1998 to 2004 in the Office of the Legal Adviser at the U.S. Department of State. During his tenure at the State Department, he worked for several years as the attorney-adviser for treaty affairs, addressing legal and constitutional issues associated with U.S. treaties.