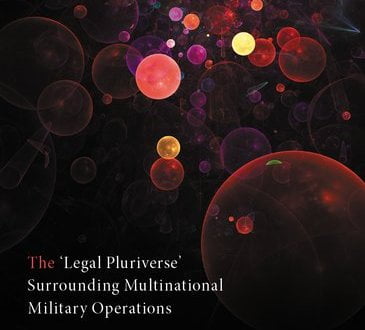 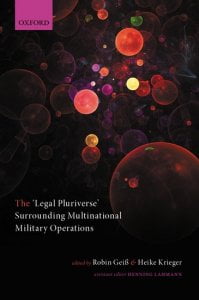 The ‘Legal Pluriverse’ Surrounding Multinational Military Operations conceptualizes and examines the “Pluriverse”: the multiplicity of rules that apply to and regulate contemporary multinational missions, and the array of actors involved. These operations are further complicated by changes to the classification of the conflict, and the asymmetry of obligations on participants.

Structured into five parts, this work seeks, through the diversity of its authorship, to set out the web of legal regimes applicable to military operations including forces from more than one state. It maps out the ways in which different regimes interact, beginning with the laws of armed conflict and their relation to international humanitarian and human rights norms, and extending through to areas like law of the sea and environmental law.

A variety of contributors systematically compile and take stock of the various legal regimes that make up the pluriverse, assessing how these rules interact, exposing norm conflicts, areas of legal uncertainty, or protective loopholes. In this way, they identify and evaluate approaches to better streamline the different applicable legal frameworks with a view to enhancing cooperation and thereby ensuring the long-term success of multinational military operations.