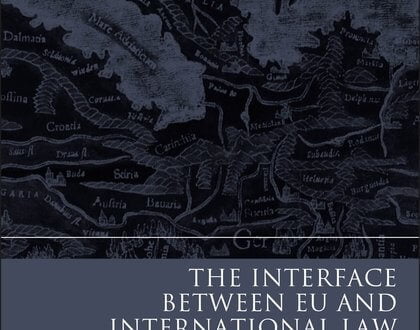 The Interface Between EU and International Law 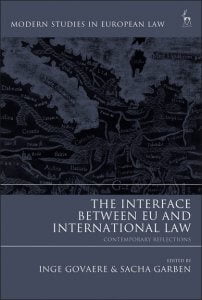 The Interface Between EU and International Law

Despite their many obvious interconnections, EU and international law are all too often studied and practised in different spheres. While it is natural for each to insist on its own unique characteristics, and in particular for the EU to emphasise its sui generis nature, important insights might be lost because of this exclusionary approach. This book aims to break through some of those barriers and to show how more interaction between the two spheres might be encouraged. In so doing, it offers a constitutional dimension but also a substantive one, identifying policy areas where EU and international law and their respective actors work alongside each other. Offering a 360-degree view on both EU and international institutional and substantive law, this collection presents a refreshing perspective on a longstanding issue.

Introduction: The Interface between EU and International Law
Inge Govaere and Sacha Garben

PART II
THE INTERACTION BETWEEN EU AND INTERNATIONAL LAW IN SELECTED AREAS
4. Integrated Rights Protection in the European and International Context: Some Reflections about Limits and Consequences
Christina Eckes
5. A Balloon Dynamic in the Area of Social Rights
Sacha Garben
6. The Interplay of International and EU Environmental Law
Nicola Notaro and Mario Pagano
7. Implementing International Norms through EU Procedure? The Case of Business and Human Rights
Pierre Thielbörger

PART IV
A VIEW FROM PRACTICE: COMMENTS ON CURRENT DEVELOPMENTS IN THE INTERFACE BETWEEN
EU AND INTERNATIONAL LAW
12. The Interaction between Public International Law and EU Law: The Role Played by the Court of Justice
Ricardo da Silva Passos
13. The Rosneft Case as a Good Example of Smooth Interaction between EU Law and International Law in the Most Recent Post-Lisbon Jurisprudence of the Court of Justice
Jenö Czuczai
14. An Incoherent Approach Towards Aarhus and CETA: The Commission and External Oversight Mechanisms
Laurens Ankersmit

Sacha Garben is Professor of EU Law at the College of Europe.