Since the election of Donald Trump as US president last November – the culmination of an upsurge in nationalist-populist sentiment across the Western world – the weaknesses of existing multilateral frameworks have come increasingly to the fore. But the current crisis of the liberal world order has been a long time in the making.

In fact, it has been apparent since before the turn of the century that the post-World War II governance structures were untenable, because the assumptions that formed their foundation were beginning to crumble. In particular, with emerging economies, especially China, on the rise, the division between the West and the “rest” was narrowing fast.

Yet the global economy’s institutional underpinnings – the IMF and the World Bank – have remained largely unchanged. Indeed, the multilateral institutions on which global governance rests do not look all that different today than they did in 1944, when Britain’s John Maynard Keynes and America’s Harry Dexter White convened representatives from 44 countries in in Bretton Woods, New Hampshire, to design the post-WWII international order.

There has been no shortage of signals that the global economy’s institutional architecture needs to be updated. If the Asian financial crisis of 1997 pointed to the potential for contagion in an increasingly interconnected financial system, the global crisis of 2008 directed a neon-lit flashing arrow at it.

Meanwhile, China’s rise to prominence as a global economic powerhouse was by no means subtle. After some three decades of double-digit economic growth, facilitated in the latter years by its 2001 accession to the WTO, China has emerged as the world’s second-largest economy (the largest, by some measures) and its top exporter. Last year, the renminbi was added to the basket of currencies that, along with the US dollar, the euro, the Japanese yen, and the British pound, determines the value of the IMF’s reserve asset, the Special Drawing Right.

And China was not the only emerging economy to contribute to the transformation of the global economic landscape. Taken together, the “BRICS” countries – Brazil, Russia, India, China, and South Africa – were expected in the early 2000s to become the new engine of the global economy. Though some of these countries have not lived up to their billing – owing to some combination of dependence on the commodities cycle, reluctance to embrace reform, and domestic political challenges – there is no doubt that they have reshaped the global order.

The Untenable Slowness of Progress

Despite these tectonic shifts, attempts to reform the Bretton Woods institutions have so far been fragmented and uncoordinated. In 1999, in the wake of the Asian crisis, the G20 was established as a forum for finance ministers and central bankers of the 20 largest developed and developing economies, in order to expand representation in global economic governance beyond the G8.

After the 2008 crisis, the G20 became a leaders’ forum, responsible for rethinking the international monetary and financial system. And, in 2010, things seemed to be going according to plan, with the G20 promoting a plan to reform the governance and quota structure of the IMF by redistributing votes and seats to underrepresented emerging economies, especially China.

This initiative, however, produced limited action. Despite improvements in the IMF’s policy approach and staff diversity, the Fund’s governance remains dominated by the same main shareholders, with the United States retaining its veto power and Europe de facto guaranteed the managing director job.

The Path of Most Resistance

In order to be legitimate, effective, and accountable, multilateral economic institutions need to work proactively to align representation within the institutions with countries’ relative economic weight and systemic importance. Waiting for leadership to change organically – that is, leaving it up to developing countries to work together to get their voices heard – simply will not bring about the governance reforms that are needed.

To be sure, if developing countries can all get behind a single candidate, it is possible that the next IMF managing director will be a non-European. But that landmark would be achieved nearly a quarter-century after the Asian financial crisis – far later than it should have. Simply put, the onus should not be on developing countries to fight for the influence they have already earned.

Moreover, the leading advanced economies cannot realistically be expected to relinquish gracefully their claim to the top jobs at the world’s most important multilateral economic institutions. After all, it took the US Congress five full years to ratify an international deal to reform the IMF quota system.

Such resistance seems set only to intensify, at least in the US. Trump has expressed clearly his distaste for international structures – from NATO to the Paris climate agreement to the G20 – which he claims advance the interests of others over those of the US. He has also made explicit his belief that the US should no longer bankroll the provision of global public goods, from defence to financial stability.

Add to that the deafening silence from the largest European countries on the issue, and it is possible that emerging economies, particularly China, will give up on advocating reform from within the Bretton Woods system. While emerging economies have made it clear that the existing system can remain relevant, if all stakeholders commit to making the necessary changes, a credible plan to do so has yet to emerge.

If the major advanced economies continue to lag in pursuing change, the emerging economies, with China in the lead, could well decide to pursue a more radical course, one that aims to replace, rather than reshape, today’s institutions. Already, China has spearheaded the creation of two multilateral development institutions – the Asian Infrastructure Investment Bank (AIIB) and the New Development Bank (NDB) – as well as the Silk Road Fund, financed exclusively by the Chinese government.

The AIIB and the NDB are headquartered in Beijing and in Shanghai, respectively. They have fewer resources than the World Bank – $100 billion for the AIIB and $50 billion for the NDB, compared to $200 billion for the World Bank – but they are big enough to finance significant infrastructure projects in the region. While the NDB is limited to the BRICS, the AIIB has 56 shareholder countries, with the notable exceptions of the US and Japan. (In yet another sign of American resistance to greater Chinese institutional leadership, US President Barack Obama’s administration pressured its allies not to join.)

The IMF retains its role in providing an extensive financial safety net for the global economy. But regional facilities have been created to provide a cooperative mechanism for dealing with occasional liquidity crunches. The Chiang Mai Initiative (CMI), for instance, pools the foreign-exchange reserves of the ASEAN+3 countries – a nominal total of $240 billion – to provide currency swaps to members in times of financial distress. The facility can be expanded if necessary, provided that members are prepared to assume the risk. Similarly, BRICS countries can rely on a Contingency Reserve Arrangement of approximately $100 billion.

Last April, the G20 finance ministers and central bank governors established an “Eminent Persons Group on Global Financial Governance” to make recommendations on how to reform the world economy’s institutional infrastructure. To succeed, the group will need to reconcile the views of the countries that form the bulk of the membership of the Bretton Woods institutions and devise a concrete plan for rebalancing.

But the group has only until next year’s annual IMF/World Bank conference to wrap up its work and issue recommendations. That is not a lot of time to engage in the necessary deliberations, especially given the broadness of the group’s mandate. Just as the Bretton Woods institutions resulted from years of debate about how to shape a new model of international economic cooperation, the reform of these institutions must reflect a process of careful deliberation.

To be sure, since the 2008 financial crisis, there has been much debate about globalization, governance, international cooperation, and the tension between open markets and domestic politics. Well-rehearsed discussions of issues like financial surveillance, coordination, moral hazard, international lenders of last resort, a debt-resolution regime, and sustainability in development finance will surely inform the work of the eminent persons group.

But discussion does not imply consensus, and I am not convinced that agreement on any of these topics is strong enough to produce concrete policy action. The question of how to pursue governance and quota reform in the Bretton Woods institutions – critical to these bodies’ survival – is nowhere near answered. And Trump’s US, which is engaged in its own rethinking of its role in world affairs, remains a wild card.

America’s quota in the IMF amounts to approximately $113 billion, and the US has contributed some $27 billion to the World Bank since 2010. Moreover, the US has long been a leader and crisis manager within the international institutional framework. If Trump’s “America First” leads him to turn on financial multilateralism, the US would deal a massive blow to the institutions that underpin the global monetary system.

In particular, Trump may decide that, rather than fully delegating leadership responsibilities to the institutions themselves, the US should intervene on an ad hoc basis, potentially within bilateral frameworks, whenever he believes that an important national interest is at stake. Unfortunately, this approach – which certainly would not be embraced by a country like China – does seem to be the one that is most aligned with the Trump administration’s worldview and foreign policy.

In this uncertain context, the best way forward may be not to assume that a partial US withdrawal from the Bretton Woods system would spell disaster, and instead to consider how the US stance may open the way for change. It will not be easy, particularly if Trump decides that the US should start making its own rules. But if the other main players cooperate, there is a chance that the Bretton Woods system can survive changing economic dynamics.

Time is not on our side; indeed, a year is probably not a long enough time to deal with the disruption that a reluctant hegemon may create. But it may deliver a better sense of the scale of the disruption that the US may be prepared to trigger – and the capability of the rest of the Bretton Woods system’s stakeholders to adapt. 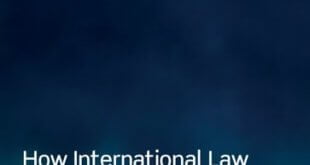 How International Law Works in Times of Crisis