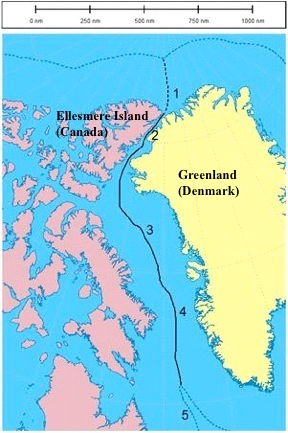 On 28 November last year Canada and the Kingdom of Denmark announced that they had reached a tentative agreement on the maritime boundary in the Lincoln Sea. The Lincoln Sea is a body of water bordering the Arctic Ocean, north of Canada’s Ellesmere Island and Greenland, which, together with the Faeroe Islands, is part of the Kingdom of Denmark. The Canadian/Danish agreement partly settles long-standing uncertainty over the northern boundary between the two countries, but it does not settle the dispute over Hans Island which is situated right in the middle of a potentially important sea route to the Arctic Ocean.

Most of the boundary between Canada and Greenland was established by a delimitation treaty in 1973. The treaty delimited the continental shelf, covering:

Although that treaty officially concerned the continental shelf, both Canada and Denmark have used the delimitation line to define fishing zones. Thus by usage it is had become a maritime boundary.

The 1973 delimitation treaty lists 127 points from the Davis Strait in the south to the Nares Strait (also know as Robson Channel) in the north, the narrow strait of water between the northernmost part of Ellesmere Island and Greenland. That treaty established a boundary of nearly 1,500 nautical miles. At the time, it was the longest shelf boundary ever negotiated. The new agreement extends the boundary to more than 1,600 nautical miles.

Most of the boundary follows a median line extending 200 nautical miles from the respective coasts. This was not possible in the Nares Strait and Kane Basin, the northernmost part of the boundary, due to the proximity of Ellesmere Island to Greenland. In fact, the two islands are so close that when Canada extended its territorial sea from 3 to 12 nautical miles in 1972, it went beyond the median line with Greenland. The northernmost part of the delimitation line was therefore settled by negotiation.

No agreement was reached with regard to the Lincoln Sea. Instead, the 1973 treaty stated that ‘for the time being the Parties have not deemed it necessary to draw the dividing line further north than point No. 127’. It was later agreed that the boundary in the Lincoln Sea should be an equidistance line, but there was disagreement on technical aspects of how the line should be drawn. The new agreement settles these technical aspects and solves a disagreement that has existed since the 1970s concerning a small area of approximately 65 square nautical miles.

According to the information released, the new agreement will provide an opportunity to modernize the provisions in the 1973 treaty and to complete a process of technical adjustments to the coordinates of the existing boundary. Amendments were already made in 2004 and further technical adjustments occurred to the southern part of the boundary in Baffin Bay and Davis Strait in 2009. More recently experts have completed work for Nares Strait. Experts from both countries have also been working together collecting data for the extension of the continental shelf boundary beyond 200 nautical miles.

Although neither Canada nor Denmark has yet made a submission to the Commission on the Limits of the Continental Shelf (discussed by Douglas here) concerning the Arctic Ocean, it is likely that they will do so in the near future (for Canada the deadline is November 2013 and Denmark November 2014). Assuming that the Commission accepts that each has a continental shelf in the Arctic beyond 200 nautical miles, the delimitation of a boundary between the continental shelves will be necessary.

For now, the new agreement means that the boundary between Canada and Greenland is almost complete, except for a 1,2 kilometer gap between point 122 and 123. The reason for the gap is a small barren knoll with the name of Hans Island. Sovereignty over the island has long been disputed and the 1973 delimitation line stops on each side of the low-water mark of the island.

Hans Island is uninhabited and has no known deposits of oil or other raw materials, but it is situated right in the middle of a potentially important sea route. The continued melting of ice in the Arctic Ocean is expected to result in the opening (at least during parts of the year) of the Northwest Passage. However, as the agreed delimitation line seemingly leaves the island without any territorial waters, sovereignty over the island has no effect on the legal control of navigation in the strait. Thus it is difficult to find a rational explanation for the longstanding dispute over the island, other than national pride.

Except for the occasional expedition, the island was largely unheard of until 2005, when Bill Graham, then Minister of Defense, hoisted the Canadian flag on the island. This resulted in an official protest from the Danish Government and a frenzy of expeditions (see timeline here). These expeditions are often referred to as the ‘battle of the bottles’ as Canadian and Danish visitors left bottles of liquor when they remove the other sides’ flag and erected their own. These activities were carried out by the national forces of both States. Presumably this was done to demonstrate ‘effective control’ over the island. As stated in the Danish Strategy for the Artic: ‘Enforcement of sovereignty is exercised by the armed forces through a visible presence in the region…’

As the island is uninhabited, neither Canada nor Denmark can claim it on the basis of historical occupation. There are no known treaties explicitly mentioning the island, nor is the principle of uti possidetis applicable. Canada bases its claim on its acquisition of Britain’s Arctic territories, by the British Adjacent Territories Order of 1880. But the British did not discover the island. The first reference to ‘Hans Island’ appears in the Narrative of the North Polar expedition (p. 407) from 1872. The expedition was led by Captain C.F. Hall, an American. The island was named after Hans Hendrik, a Greenlandic Inuit who was a member of Hall’s expedition.

The United States claimed part of northern Greenland until 1917. The claim was relinquished as part of a transfer agreement concerning the Danish West Indies, now the United States Virgin Islands.

Denmark’s claim to Greenland dates back the early Nordic colonies founded by Eric the Red in the tenth century (PCIJ, Legal Status of Eastern Greenland (1933)). The title was recognized by the Permanent International Court of Justice, which inter alia stated that in the:

‘absence of all claim to sovereignty over Greenland by any other Power, Denmark must be regarded as having displayed during this period of 1814 to 1915 her authority over the uncolonized part of the country to a degree sufficient to confer a valid title to the sovereignty.’ (p. 54)

Whether this includes Hans Island is open to debate. In any case, the announcement of 28 November states that: ‘The tentative agreement does not address the issue of sovereignty over Hans Island.’ Instead, that issue is to be ‘subject of continuing discussion intended to arrive at a mutually satisfactory solution.’

Recently, there have been reports that the island may be split down the middle. A friendly solution would be preferable to a ‘scramble’ for the Artic. The practice of using State forces to display ‘effective control’ over uninhabited islands is worrying. This is one area where international law does not seem to secure international peace and security, but rather the opposite. Canada and Denmark would do well establishing a positive example for other States to follow. 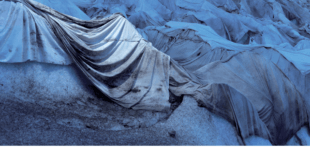 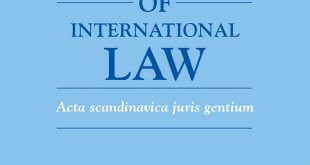