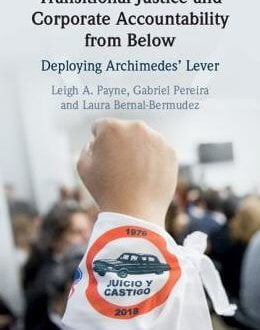 Transitional Justice and Corporate Accountability from Below 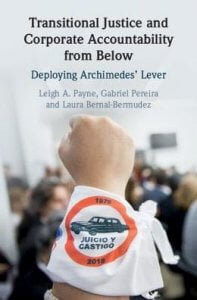 Transitional Justice and Corporate Accountability from Below

Bruno Tesch was tried and executed for his company’s Zyklon B gas used in Nazi Germany’s extermination camps. This book examines this trial and the more than 300 other economic actors who faced prosecution for the Holocaust’s crimes against humanity. It further tracks and analyses similar transitional justice mechanisms for holding economic actors accountable for human rights violations in dictatorships and armed conflict: international, foreign, and domestic trials and truth commissions from the 1970s to the present in every region of the world. This book probes what these accountability efforts are, why they take place, and when, where, and how they unfold. Analysis of the authors’ original database leads them to conclude that ‘corporate accountability from below’ is underway, particularly in Latin America. A kind of Archimedes’ lever places the right tools in weak local actors’ hands to lift weighty international human rights claims, overcoming the near absence of international pressure and the powerful veto power of business.

Leigh A. Payne, University of Oxford
Leigh A. Payne is Professor of Sociology and Latin America at the University of Oxford, St Antony’s College. She has won awards from the National Science Foundation, the Economic and Social Research Council, the Arts and Humanities Research Council, the British Academy, and others for her research on human rights, transitions from authoritarian rule and armed conflict, the armed right wing, and business.

Gabriel Pereira, University of Oxford
Gabriel Pereira is a researcher at the Consejo Nacional de Investigaciones Científicas Técnicas of Argentina (CONICET) and an affiliated researcher to the Latin American Centre of the University of Oxford. He is also a Professor in Human Rights at the School of Law at the National University of Tucumán. He has written in journals and books on fields including transitional justice, business and human rights, human rights, and judicial politics. He is a co-founder and member of the human rights organization Andhes.

Laura Bernal-Bermúdez, Pontificia Universidad Javeriana, Colombia
Laura Bernal-Bermúdez is Assistant Professor at the Faculty of Law of Pontificia Universidad Javeriana, Colombia. She is also affiliated with the Latin American Centre at the University of Oxford as a research consultant. In her work she uses mixed methods to look at issues related to armed conflict and access to justice in contexts of transition for victims of grave human rights violations.