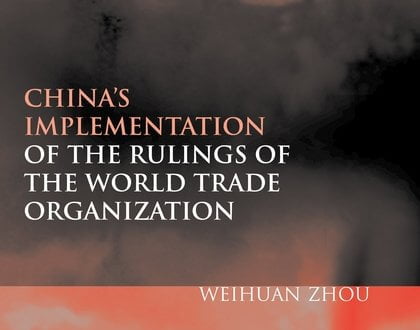 Amid the ongoing crisis surrounding the WTO, China’s role and behaviour in the multilateral trading system has attracted overwhelming attention. This timely monograph provides the first comprehensive and systemic analysis of China’s compliance with the rulings of the WTO’s dispute settlement mechanism (DSM). It covers all the disputes in which China has been a respondent during its 17-year WTO membership and offers a detailed discussion of China’s implementation of adverse WTO rulings, its approaches to settling WTO disputes, the possible explanations for such approaches, and post-compliance issues. The book shows how China has utilised the limitations and flexibilities of WTO rulings to ensure that its implementation of the rulings not only delivers adequate compliance but also maintains its own interests.

Overall, this book argues that the issues relating to the quality of China’s compliance and post-compliance practices concern the loopholes within the DSM itself which may be utilised by all WTO Members. However, despite the loopholes, China’s record of compliance suggests that the DSM has been largely effective in inducing compliance and influencing domestic policy-making. It is therefore in the interest of all WTO Members and other stakeholders to protect the DSM as the ‘crown jewel’ of the multilateral trading system.

Weihuan Zhou is Senior Lecturer and a member of the Herbert Smith Freehills CIBEL Centre at the Faculty of Law, University of New South Wales (UNSW) Sydney.