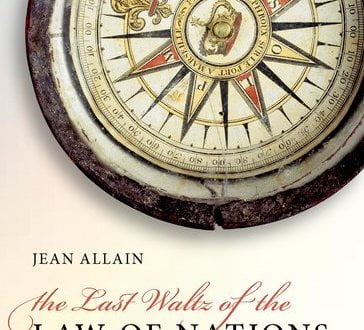 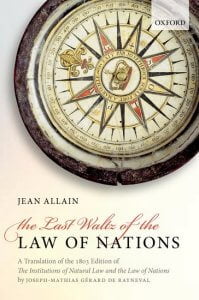 This work is a translation of de Raynevalâs 1803 classic The Institutions of Natural Law and the Law of Nations.Â Having been translated into Spanish shortly after its appearance, The Institutions was the reference point of international law for much of the French- and Spanish-speaking world during the Nineteenth Century. As a result, arguably, it is the single most important text of international law to appear between the 1814 Congress of Vienna and the 1919 Treaty of Versailles.

This, the first ever English translation of de Raynevalâs The Institutions, provides the English-language world with the last text conceived of, and written, during the era of bilaterial, European, Law of Nations; before the waltz into the Concert of Europe and the growth of multilateral diplomacy, with its end point todayâs United Nations.

De Rayneval is a product of the Ancien RÃ©gime who turned to writing The Institutions after having been purged from the Quai dâOrsay by the French Revolution.Â It may be said that in brokering the 1782 Peace of Paris which saw the United Kingdom recognise the United States of America, that Rayneval ended the war which his brother started; as it was Conrad-Alexandre de Rayneval who was the architect of the previous French policy of supporting, and later recognising, the American insurgence of the Thirteen Colonies.

Through his faithful translation and introductory essay, Jean Allain makes this classic work accessible to the new audience of the English-language World.

Joseph-Mathias Gerard de Rayneval (1736-1812) was a French diplomat who worked extensively in England and the United States of America during the Revolutionary War, serving as under-secretary of state to Comte de Vergennes (Foreign Minister to Louis XVI).

Jean Allain is a Professor of Law at Monash University, based in Australia and Professor of International Law at the Wilberforce Institute, University of Hull, UK. He also holds an Extraordinary Professorship with the Centre of Human Right, Faculty of Law, University of Pretoria, South Africa.

Prof Allain is founding Editor of the Irish Yearbook of International Law, and author of four monographs and five edited volumes, including The Legal Understanding of Slavery: From the Historical to the Contemporary (Oxford University Press, 2012).

While completing his doctorate at the Graduate Institute of International Studies of the University of Geneva, Switzerland; he clerked for the first President of the International Criminal Tribunal for the former Yugoslavia. 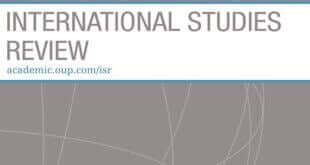