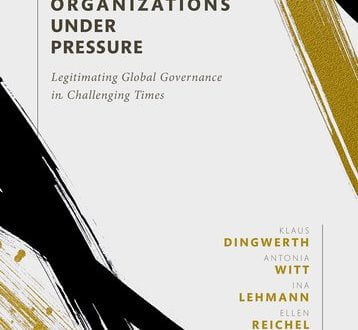 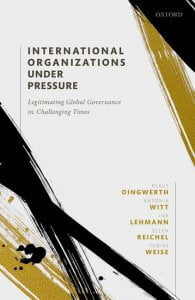 International organizations like the United Nations, the International Monetary Fund, or the European Union are a defining feature of contemporary world politics. In recent years, many of them have also become heavily politicized.

Klaus Dingwerth is Professor of Political Science with a focus on the political theory of the globalized and digital society at the University of St. Gallen, Switzerland, and a Non-Resident Fellow with the Global Public Policy Institute in Berlin. His research interests lie at the intersection of global governance and political theory. His publications include The New Transnationlism: Transnational Governance and its Democratic Legitimacy (Palgrave Macmillan, 2007) and The Language of World Trade Politics: Unpacking the Terms of Trade (co-edited with Clara Weinhardt, Routledge, 2019).

Antonia Witt is a post-doctoral researcher at the Peace Research Institute Frankfurt (PRIF), Germany. She holds an M.A. in African Studies and Political Science (2010) as well as a doctorate (2016) from the University of Leipzig, Germany. For her doctoral research ‘Ordering by default: The power and politics of post-coup interventions in Africa’, Witt was awarded the 2017 Christiane-Rajewsky-Award of the German Association for Peace and Conflict Studies (AFK) as well as the 2018 award of the German Association for African Studies in Germany (VAD).

Ina Lehmann is a PhD candidate at the University of Bremen, Germany. She holds a Master’s degree in Peace and Security Studies from the University of Hamburg. Her research interests include global justice, environmental justice, the legitimacy and legitimation of global governance, sustainable development, and climate and biodiversity protection. Her publications have appeared in Ecological Economics, Biological Conservation, and International Studies Perspectives.

Tobias Weise is a Communications and Marketing Manager at the German University of Health and Sport, Berlin. In 2016, he was awarded a doctoral degree in Political Science from the University of Bremen for his thesis ‘Participation and Transparency in Intergovernmental Security Organizations. Resource and Norm Driven Opening in the IAEA and OPCW’. Before joining DHGS, Weise was a research associate at the University of Bremen, Germany and the University of St. Gallen, Switzerland. His publications have appeared in Global Governance and International Studies Perspective. 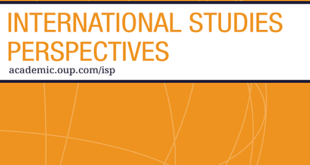