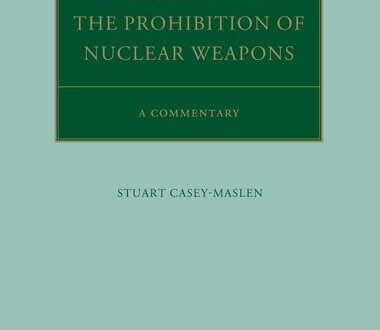 This Commentary offers detailed background and analysis of the Treaty on the Prohibition of Nuclear Weapons, which was adopted at the UN Headquarters in New York in July 2017. The Treaty comprehensively prohibits the use, development, export, and possession of nuclear weapons.

Stuart Casey-Maslen, a leading expert in the field who served as legal adviser to the Austrian Delegation during the negotiations of this Treaty, works through article by article, describing how each provision was negotiated and what it implies for states that join the Treaty. As the Treaty provisions cut across various branches of international law, the Commentary goes beyond a discussion of disarmament to consider the law of armed conflict, human rights, and the law on inter-state use of force. The Commentary examines the relationship with other treaties addressing nuclear weapons, in particular the Treaty on the Non-Proliferation of Nuclear Weapons (NPT). Background on the development and possession of nuclear weapons and theories of nuclear deterrence is provided. Particular attention is paid to controversial issues such as assistance for prohibited activities, the meaning of ‘threaten to use’, and the definition of nuclear explosive devices. Casey-Maslen also considers whether a member of NATO or other nuclear alliance can lawfully become a state party to the Treaty.

Stuart Casey-Maslen is Honorary Professor at the Centre for Human Rights at the University of Pretoria in South Africa. He has more than 20 years’ experience in disarmament and holds a doctorate in the law of armed conflict and master’s degrees in forensic ballistics and in international human rights law. He has authored or edited a dozen publications on disarmament law, including commentaries on the 2013 Arms Trade Treaty, the 1997 Anti-Personnel Mine Ban Convention, and the 2008 Convention on Cluster Munitions, all published by Oxford University Press, and treatises on the regulation of nuclear weapons under international law and of weapons under international human rights law, both published by Cambridge University Press. He was legal adviser to Austria for the negotiation of the Treaty on the Prohibition of Nuclear Weapons in June-July 2017 and legal adviser to Switzerland for the negotiation of the Arms Trade Treaty in 2012-2013.