Port State Jurisdiction Beyond Oceans Governance: The Closure of Ports to Qatar in the 2017 ‘Gulf Crisis’

Port State Jurisdiction Beyond Oceans Governance: The Closure of Ports to Qatar in the 2017 ‘Gulf Crisis’

5 June 2017 witnessed numerous states severing diplomatic ties with Qatar, including Bahrain, Egypt, Saudi Arabia (see also part 2, part 3) and the United Arab Emirates (UAE). These were later joined by the Comoros, Libya (Provisional Government), the Maldives, Mauritania and Yemen. Others have downgraded relations with Qatar to a lesser degree (e.g. recalling ambassadors), including Chad, Djibouti, Eritrea, Jordan, Niger and Senegal. However, as a sign of rising tensions, the measures adopted go further than the previous 2014 breakdown of relations. A number of territorial restrictions in the Persian Gulf region were adopted against persons, vessels or aircraft with a link to Qatar. The most interesting measures for discussion here are those adopted in a port state capacity. The key question concerns the jurisdictional basis on which these port states have taken measures against foreign vessels – especially given the imposition of denial of entry on the basis of purely extraterritorial conduct (visited Qatar), or future conduct (destined for Qatar)?

Since adoption of the United Nations Convention on the Law of the Sea (UNCLOS), the formal role of port states in ocean governance has been increasing. Port states had played a role prior to UNCLOS, focused upon issues of marine pollution, but this has been expanded upon by subsequent treaties further addressing pollution, labour standards and the fight against illegal, unreported and unregulated (IUU) fishing (on which see the recent post by Diane Desierto). In this post I cover a further direction in the use of regional port state measures that has been highlighted by recent events within the Persian Gulf: the shaping of another state’s foreign and domestic policies.

A port state may be defined as the state with territorial sovereignty over a port to which a foreign vessel is requesting entry, or currently resides within. The United Arab Emirates (UAE), as a port state, closed all seaports to Qatari vessels and banned all Qatari means of transportation (sea and air) from entering or leaving its territory. To implement this decision, Fujairah, Abu Dhabi (and also see here), Ras Al Khaimah, and Sharjah ports have prohibited entry to Qatari flagged or owned vessels, all vessels destined to, or coming from, Qatari ports, and all vessels carrying cargo destined for or coming from Qatar (subsequently, slightly eased). Bahrain (and also see here) similarly closed all its ports to vessels coming from or going to Qatar. Saudi Arabia (and also see here) closed all sea ports to Qatari flagged or owned vessels, and denied port unloading/loading services to all vessels carrying cargo to/from Qatar. While UAE stated it would prevent “means of transportation” leaving its territory, reports only indicate containers being stuck in port. In contrast, the Saudi Port Authority confirmed vessels “destined for Qatar” will not be given clearance to leave port. According to Intertanko, there are “conflicting reports regarding the use of ports in Egypt”. In contrast, other port states, including Iran and Oman, who object to the economic pressures imposed, have offered access and use of their ports necessary for vessels destined to Qatar.

Normally, under the rules of state jurisdiction, a state must demonstrate a sufficient nexus to the conduct being regulated, or prescribed for. The commonly used principles of territoriality, nationality, treaty based, or universal jurisdiction are not readily applicable to provide a nexus to the use of a foreign (Qatari) port by a foreign vessel. While presence within port provides territorial enforcement jurisdiction, it would be a significant broadening of subjective and objective territorial prescriptive jurisdiction if mere presence was sufficient to incorporate all elements of extraterritorial conduct. Requests for entry are also not defined geographically but by time (e.g. three working days in advance). It therefore cannot provide predictable territorial conduct on which to hook prescriptive jurisdiction. Alternatively, given the severance of diplomatic relations was argued upon grounds of ‘national security’, it could be suggested the protective principle would provide the required nexus. However, when one examines the Qatari policies said to endanger regional security (below), there is no suggestion the import or export of goods into Qatar by sea threatens the security of other states. Security concerns may have driven the initiation of economic measures against Qatar to influence Qatari foreign and domestic policies. But it does not provide a nexus to condition the use of Qatari ports by visiting vessels because that conduct is not directed against the security of the prescribing state, e.g. Bahrain.

Nonetheless, in recognising the residual jurisdiction of port states, the law of the sea regime makes frequent reference to the preserved ‘sovereignty’ of states over their port (most recently, PSMA, art. 4(1)(b)). ‘Sovereignty’ incorporates rights broader than prescriptive jurisdiction alone. Arguably, if these port states wished to enforce their measures through sanctions beyond denial of port entry or use of services, that would necessitate a validly prescribed rule on the basis of one or more of the jurisdictional principles described above. However, these states have limited themselves to the denial of port entry and services. This practice is best seen as the withholding of port privileges to foreign vessels and, subject to treaty arrangements, a foreign state has no entitlement under general international law to those privileges. In the context of my ongoing PhD research on port state jurisdiction and IUU fishing, it has become clear that the question of which foreign vessels are granted entry is, like the entry of foreign nationals, a right of ‘domestic jurisdiction’ (UN Charter, art. 2(7)). Control of entry is a power which flows from state sovereignty, to be exercised by that state at its discretion. Subject to any limitations subsequently accepted (e.g. international trade law), the port state is free to set the conditions of entry it deems necessary without recourse to the principles of prescriptive jurisdiction and the limits of e.g. territorial jurisdiction. If a state deems necessary, it may therefore deny entry based on purely extraterritorial conduct. This contrasts with port state practice imposing more onerous measures such as fines or confiscation. These are only prescribed upon a significant element of territorial conduct (e.g. ‘importation’ without complete/accurate catch certification; EU Reg. 1005/2008, art. 18(3)) or a recognised extraterritorial principle (e.g. treaty based; UNCLOS, art. 218).

Therefore, given the gulf states have limited themselves as port states to the denial of entry to foreign vessels, the legality of these measures as a discretionary right derived from sovereignty and essentially unregulated by international law cannot be questioned. The admission of aliens, or in this case foreign vessels, remains within the domestic jurisdiction or reserved domain of state sovereignty – unaffected by the extraterritorial nature of the decision. Should these gulf states go further however, setting fines for example, then the competence of the state to prescribe and enforce such rules would be governed by the international law of state jurisdiction. It would be doubtful if, in these cases, valid jurisdiction exists to regulate the use of Qatari ports by foreign vessels.

Looking beyond the legal basis of the port state measures, an interesting policy twist is that the broader severance of relations and transport links with Qatar was pursued, in part, to preserve the “national security” of Bahrain and its “sister countries” (or in solidarity with Bahrain). Essentially, the states accused Qatar of undermining “security and stability in the region” through: interference in the internal affairs of other states; the continued support, funding and hosting of terror groups; the promotion of extremism through its media networks; and a failure to live up to the 2014 Riyadh Agreement (unpublished). Qatar rejects all these accusations as “baseless”. It is suggested in the statement of the Minister of State for Foreign Affairs of the UAE that these measures were adopted to “convince Qatar to change its course” and relations will only normalise after a demonstrable change in policy.

These states are therefore using port state rights we often associate with oceans governance or international trade policy objectives to deter broader Qatari foreign policies and the internal Qatari policies towards particular groups or persons (responses; Qatar, UNSG). Furthermore, just as we witnessed with oceans issues such as adherence to international conventions (e.g., Paris MoU), or combatting IUU fishing (e.g. CCAMLR, CMM 10-05), this is being done on a regional level. Saudi Arabia, Bahrain and the UAE appear to be working in unison and in the interest of regional values, namely the security and stability of Gulf Cooperation Council states. These regional values, or responsibilities, are said to be only achievable through collective responses. They are beginning to gain support from global actors in terms of the ends pursued, such as by the USA and the Organisation of Islamic Cooperation, but not the means utilised.

As a concluding thought, port state jurisdiction over entry and use may have arguably come full circle. The power to close ports to foreign vessels flows from the sovereignty a state possesses over its territory. This was often utilized to condition and regulate visiting foreign vessels, exerting influence over maritime conduct which would normally be beyond the jurisdiction of the port state. Territorial rights (not to be confused with territorial jurisdiction) were used to implement oceans governance objectives. Vice versa, in this dispute the necessity of maritime conduct, be it navigation or commerce, is being used to exert influence over terrestrial policies. Unilateral and regional oceans governance is being used to influence the territorial rights of Qatari domestic and foreign policy. Thus, within the law of the sea we often summarise the basis of maritime rights as “the land dominates the sea” (Qatar v Bahrain, para. 185). Only time will tell whether, in this case, the necessity of utilising the seas dominates the land, and at what cost (OHCHR)? 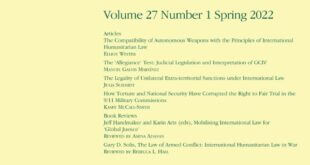