[Alonso Illueca is Adjunct Professor of International Law at Universidad Católica Santa María La Antigua (Panama) and holds an LL.M. from Columbia University, where he specialised in Public International Law. His main fields of research include recognition of states and governments, the law of treaties, and the use of force. Sophocles Kitharidis is a sessional academic at Monash University and holds an LL.M from the University of Melbourne, where he specialised in Public International Law. He has worked and published within the field of public international law, with his current fields of research including the use of force, peacekeeping operations and the law of international organisations.]

On 30 January 2017, Morocco was admitted to the African Union (AU) after previously withdrawing more than three decades ago, from the Organization of African Unity (its predecessor). Morocco became the 55th Member State of the AU, a decision adopted by “consensus”.  Nevertheless, as many as 15 Member States, inter alia, South Africa and Algeria, initially stressed their disapproval of Morocco’s bid. These States were concerned with the simultaneous debate on the question of the Western Sahara and the status of the Sahrawi Arab Democratic Republic (SADR) in the AU.

The return of Morocco to Africa’s regional organization raises a plethora of issues within the field of Statehood. One central issue explored below is whether Morocco’s membership to the AU, has a practical effect on the SADR’s claim of statehood, given the SADR membership to the regional organization.  In addition, what are the legal consequences of Morocco’s action vis-à-vis the SADR?

The UN and the question of recognition of States

The status of the Western Sahara remains a contested issue since the 1970s. This situation has been the subject of a treaty (Madrid Accords), the advisory jurisdiction of the International Court of Justice, an armed conflict, and several resolutions by the UN General Assembly (UNGA) and the Security Council (UNSC). The UNGA has characterized Morocco’s presence in Western Sahara as an “occupation”, recognizing the right to self-determination and independence for the people of Western Sahara with the Polisario Front as their legitimate representative (see resolutions 34/37 and 35/19).

After 15 years of hostilities between Morocco and the SADR, the UN brokered a ceasefire. In 1992, the UNSC established the UN Mission for the Referendum in Western Sahara with the mandate of implementing a Settlement Plan (See S/21360 and S/22464) in the hope of leading a referendum on self-determination. Needless to say, the Plan has not been fully implemented, but the ceasefire has been maintained.

The UN considers the Western Sahara as a non-self-governing territory (see here and UN Charter, Chapter XI). Notwithstanding this status, the SADR has managed to gain recognition by more than 80 States (even though many of them have later withdrawn it). It is important to note that the UN is not the appropriate legal entity to recognize States, given its adopted (and maintained) view that recognition can only be granted or withheld by States (see here & UN Doc. 1466). The UN appears to follow the practice of the League of Nations, where membership was not equated with recognition by all Members.

The SADR membership to the OAU and the AU

In 1982, the SADR was admitted to the OAU. Art IV of the OAU Charter establishes that the organization is open to “each independent sovereign African State”. Reacting to the OAU decision to admit the SADR as a Member State, Morocco decided to withdraw from the regional body. In 2001, the OAU was replaced with the AU, whose membership is open to any “African State” (AU Constitutive Act, Article 29). Additionally, 38 out of the 54 (now 55) AU Member States have explicitly recognized the SADR, accounting to 70% of the Union’s membership.

Recognition Theories applied to the SADR

Within the field of the recognition of States, two theories offer divergent views: (1) the declarative doctrine, which advocates for a norm based approach to the Statehood question, and (2) the constitutive doctrine, which offers a collective approach to the question. These theories provide different answers to the question of the SADR’s statehood.

When reflecting on the doctrinal debate of the recognition of States, one would assume that by applying the declarative theory, the admission of Morocco to AU would not have practical effects on the SADR’s Statehood claim. The declarative theory considers the political existence of a State as a ‘fact’, which is independent of recognition by other States. This theory, as articulated by the 1933 Montevideo Convention (arts. 1, 3 & 6) characterizes the act of recognition of a State as the acceptance of the entity’s international legal personality with all the rights and duties determined by international law. It considers recognition as an ‘unconditional and irrevocable’ act. To be recognized as a State, the aspiring entity must fulfil the Montevideo criteria (art. 1, note that this criteria has been expanded on by other scholars). As such, the act of recognition is nothing more than the acknowledgement of a pre-existent condition (Statehood) by other States. Consequently, the SADR claim would depend on its ability to satisfy the criteria for statehood, namely permanent population, defined territory, government, and the capacity to enter relations with other States.

The declarative doctrine was adopted by the Organization of American States’ Charter (arts. 13-14). Similarly, the Institut de Droit International endorsed the declaratory theory in its 1936 Resolution, while stressing the irrevocable character of recognition and the absence of effect of non-recognition by other States.

If analysed through the constitutive theory, Morocco’s admission to the AU may be interpreted as an implicit recognition of SADR. Nevertheless, this approach remains problematic as it equates the AU’s decision on admission with recognition of States. There is no established test within this theory that provides for the number of States that have to extend recognition for aspiring entity to be considered as such.

Lastly, it remains unclear whether the AU Constitutive Act adopts, if any, a Statehood recognition theory. Contrary to the question of the recognition of governments, where the AU has a settled practice on non-recognition of unconstitutional governments, its practice concerning the recognition of States remains inconclusive. Admission to the AU (Constitutive Act, art 29), requires the individual consideration by each Member State of an application. As illustrated by the case of South Sudan, the question of Statehood seems to be left for the legal and political considerations of each State.

The fact that Statehood theories do not provide a definitive answer to our first question does not mean that Morocco’s readmission to the AU had no actual legal effect. When a State declares its membership to a regional organization, it accedes to its constitutive instrument. The obligations enshrined in such an instrument become applicable to the new member (in this case, Morocco) and all other members (inter alia the SADR) notwithstanding their mutual recognition as States (See, Christian Hillgruber, p. 496). Therefore, it could be argued that by joining the AU, Morocco recognized the principles established in Art 4 of the Constitutive Act, in its relations vis-à-vis the Member States (and, therefore, the SADR), which include respect of borders existing on achievement of independence, peaceful resolution of conflicts, prohibition on the threat or use of force, non-interference in internal affairs, and peaceful co-existence of Member States. It is difficult to think what would remain of these principles if a Member State could cherry-pick which principles it would apply in its relationship with other Member States. Similar problems would also arise if a Member State could choose the States that would benefit from the principles enshrined in the AU Constitutive Act.

Similarly to the OAU Charter, the AU Constitutive Act, does not provide for reservations. Therefore, for Morocco to disregard the principles of the organization in its relations vis-à-vis the SADR, it would need, at least, the approval of all Member States of the AU as provided by the Vienna Convention on the Law of Treaties (see section on reservations).

It is also relevant to note that the AU Constitutive Act does not provide for the expulsion of members and that their suspension is only considered in cases of unconstitutional regime change. The latter entails that in the event of a Moroccan bid for suspension, exclusion or expulsion of the SADR, the Court of Justice of the Union (now the African Court of Justice and Human Rights) would be entrusted with deciding the question dealing with the “interpretation arising from the application or implementation of this Act” (AU Constitutive Act, art. 26). Prior to the establishment of this Court, the Assembly of the Union, the supreme organ of the organization, was entrusted with such decision (two-thirds majority vote). In any event, the decision would have to acknowledge the irrevocable character of the recognition that 70% of the AU membership has extended to the SADR. All things considered, the question of the SADR membership to the AU and the rights that it holds in relation to other States is likely to be considered a settled issue.

The establishment of a State is a contested issue, both doctrinally and politically. Whether Morocco’s recent admission to the AU is viewed as an implied recognition of the SADR and its statehood is of course questionable. However, this political ‘act’ allows scholars and practitioners to explore the possibility that under international law, and dependent on the interpretation of the AU’s Constitutive Act, Morocco’s admission may have legal consequences on the Western Sahara question and the SADR status under international law. 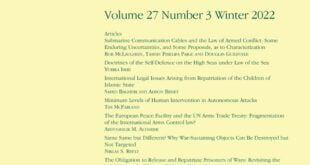