Separatist unrest spreads in Ukraine; ultimatum ends with no crackdown

Separatist unrest spreads in Ukraine; ultimatum ends with no crackdown

(Reuters) – Pro-Russian separatists on Monday ignored an ultimatum to leave occupied government buildings in eastern Ukraine while another group of rebels attacked a police headquarters as a threatened military offensive by government forces failed to materialize.

Rebels in the town of Slaviansk, which was expected on Monday to be the focus of a broad government “anti-terrorist” operation involving the army, issued a bold call for Russian President Vladimir Putin to help them.

Ukraine’s interim president Oleksander Turchinov said on Monday the offensive would still go ahead. But in a sign of discord behind the scenes in Kiev, he sacked the state security chief in charge of the operation.

Turchinov also took a risky step to try to undercut rebels’ demands by holding out the prospect of a referendum on the future shape of the Ukrainian state. He suggested a nationwide referendum could be held at the same time as a presidential election on May 25.

Pro-Russian secessionists want referendums to be held, but only in their regions in the east, which Kiev says is illegal.

The uprising by armed men in uniform who have seized buildings in towns across eastern Ukraine began eight days ago and has accelerated in the past 48 hours, with separatists seizing ever more buildings on behalf of a self-proclaimed independent “People’s Republic of Donetsk”.

Kiev says the separatists are organized by Moscow and include Russian troops in their midst, openly seeking to repeat the seizure of the Crimea region, which Moscow occupied and annexed last month.

Russia says the armed men are all locals acting on their own but it retains the right to intervene to protect them. NATO says Russia has tens of thousands of troops massed on the frontier.

The European Union threatened Russia with more sanctions. Britain said Moscow was clearly behind Ukraine’s instability, although other EU states said diplomacy should be given more time.

As the 9 a.m. deadline issued by authorities in Kiev expired, a Reuters reporter in the flashpoint city of Slaviansk, where armed men had seized two government buildings, saw nothing to show the rebels were obeying the ultimatum.

One of the rebel leaders, in an appeal issued through journalists, asked Putin to “help us as much as you can”.

The Kremlin said the Russian president was listening.

“Unfortunately, there’s a great many such appeals coming from the Eastern Ukrainian regions addressed directly to Putin to intervene in this or that form,” spokesman Dmitry Peskov said. “The president is watching the developments in Eastern Ukraine with great concern.”

Also in Slaviansk, about 150 km (90 miles) from the Russian border, a small airfield which was occupied by Ukrainian air force planes on Sunday was empty on Monday and pro-separatist forces said they were now in control of it.

In the town of Horlivka, meanwhile, about 100 pro-Russian separatists attacked the police headquarters. Video footage on Ukrainian television showed an ambulance treating people apparently injured in the attack.

In all, separatists have seized government buildings and security facilities in 10 cities, adding to a growing sense that Ukraine’s industrial heartland is slipping out of its grip.

Angered by the death of a state security officer and the wounding of two comrades near Slaviansk, Turchinov warned rebels that an anti-terrorist operation involving the army would begin unless they laid down their arms.

Russia’s foreign ministry called the planned military operation a “criminal order” and said the West should bring its allies in Ukraine’s government under control.

Outside the Slaviansk city council offices stood a group of about 12 armed men in matching camouflage fatigues with black masks, one of whom was holding a Russian flag.

They said they were Cossacks – paramilitary fighters descended from Tsarist-era border patrolmen – but did not say where from. One told Reuters: “The borders between Ukraine, Russia and Belarus are artificial and we are here to take them away.”

The new element in the operation announced by Turchinov is the inclusion of the army which until now had not been involved in more than four months of turmoil and is untested in dealing with internal disorder. The plan implies a lack of confidence in the 30,000-strong interior ministry troops, partly discredited by identification with ousted president Viktor Yanukovich.

The defense ministry on Monday remained silent and would not comment on the army’s role.

Turchinov said the Kiev leadership was “not against” a nationwide referendum being held on the type of state Ukraine should be, adding he was sure it would confirm the wish of the majority for a united, independent country.

Russian Foreign Minister Sergei Lavrov said Ukraine’s Russian-speaking eastern regions should be involved in drafting a constitution that should be put to a referendum.

Lavrov said it was not in Russia’s interests for Ukraine to break up but Moscow wanted all citizens of the country to be given equal treatment by Kiev. He denied Ukrainian and U.S. allegations that Russia had undercover agents fomenting the unrest in eastern Ukraine.

The crisis in Ukraine has brought relations between Russia and the West to their worst since the end of the Cold War in 1991, and also risks unleashing a “gas war” which could disrupt energy supplies across Europe.

Ukraine said on Saturday it would stop paying for Russian gas because the price was too high.

Kiev is also talking with Slovakia – the main route for gas from Russia through Ukraine to Europe – about reversing pipes so that Ukraine can buy gas from the EU if Russia cuts it off.

Moscow has largely brushed off sanctions so far, which the United States and Europe have explicitly designed to target only a limited number of officials and avert wider economic harm.

British Foreign Secretary William Hague said it was now time to consider broader sanctions. The destabilization of eastern Ukraine was clearly being instigated by Russia, he added: “I don’t think denials of Russian involvement have a shred of credibility.

He said some of the separatist gunmen were well armed and appeared to be well-trained, just like those who appeared in Crimea and later turned out to be Russian troops.

German Vice Chancellor Sigmar Gabriel warned of an escalation of the crisis in Ukraine, saying “Russia was clearly prepared to allow tanks to roll across European borders”.

Nevertheless, other European officials said it was too early to impose new sanctions for now. Several said the deadline for Russia to de-escalate would be Thursday, when Russian and Western officials are set to discuss Ukraine in Geneva.

In Slaviansk as Monday’s 9 a.m. ultimatum expired, a Russian flag still flew over police headquarters, one of two buildings taken over by the separatists in the town. Masked men continued to man barricades of sandbags in front of it.

Even as the deadline passed, a truck appeared bringing more tires to heap on top of the barricades to reinforce them.

Anterior U.S. Says Iran’s Pick for U.N. Envoy Won’t Get a Visa
Siguiente Sense and Nonsense of Territorial Referendums in Ukraine, and Why the 16 March Referendum in Crimea Does Not Justify Crimea’s Alteration of Territorial Status under International Law

The South China Sea Arbitration is Here! And China Will Not Be Happy 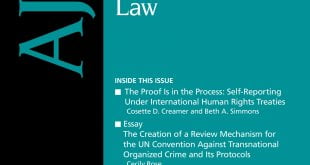