“Without further delay” – Senegal must prosecute or extradite Hissène Habré

“Without further delay” – Senegal must prosecute or extradite Hissène Habré

On 20 July 2012, the International Court of Justice (ICJ) issued its final judgment (summary found here; press release found here) in the proceedings brought by the Kingdom of Belgium against the Republic of Senegal concerning the desired prosecution of Chad’s former head of state, Mr. Hissène Habré – a now long-term resident of Dakar. The victory rests with Belgium, which has sought Habré’s prosecution in Senegal, or his extradition from Senegal to Belgium, for mass acts of torture committed in Chad during his presidency from 1982-1990, with the ICJ recognizing that: “Extradition and prosecution are alternative ways to combat impunity” (para. 50).

However, the victory (in this case concerning “Questions relating to the obligation to prosecute or extradite”) was secured by a refinement, or narrowing, of the basis for the complaint. In its 2009 Application instituting proceedings, Belgium had argued that Senegal was obliged to bring criminal proceedings against Mr. Habré as a matter of customary international law concerning core international crimes, but by 2012, the focus of the inquiry had shifted to the more specific obligations of the Convention against Torture and Other Cruel, Inhuman or Degrading Treatment or Punishment (or CAT to use the summarizer’s short-form), with the ICJ making clear that any state party to a treaty such as the CAT or the Genocide Convention (paras 68-69) has a “common interest in compliance” and can make a claim concerning the cessation of an alleged breach by another state party (thus sidestepping the question of whether Belgium is an injured state or has a special interest). The ICJ has confirmed that the obligations of the CAT may be defined as “obligations erga omnes partes” in the sense that each state party has an interest in compliance with them in any given case (although this point does receive discussion in the separate opinion of Judge Skotnikov). The issue of whether there exists an obligation for a state to prosecute crimes under customary international law that were allegedly committed by a foreign national abroad is expressly left for another day (para. 54) (with Judge Abraham in a separate opinion putting down a marker that in his view, there is no such customary rule).

After years of waiting for either a prosecution or an extradition in relation to the desire for Mr. Habré to stand trial for crimes committed whilst President of Chad, Belgium instituted proceedings against Senegal before the ICJ in February 2009. Belgium also at that time unsuccessfully sought an order for provisional measures, previously discussed here. The parties later submitted their written memorials in 2011, and an oral hearing was held before the ICJ in March of this year. (In dissent, Judge ad hoc Sur regrets the hasty nature of the reasoning of the Judgment.) Briefly stated, Belgium took the position that Senegal was in breach of its obligations under international law, specifically the CAT, while also maintaining a customary law argument, while Senegal argued that by taking various measures, it was fulfilling its obligations under the CAT and acting in compliance with its earlier declaration before the ICJ in 2009 that it was taking steps to prepare for the trial of Mr. Habré.

As for intervening factors of interest, Senegal had referred the Habré matter to the African Union in late 2005, which led to an African Union decision in July 2006 “to consider the Hissène Habré case as falling within the competence of the African Union.” Belgium repeatedly asked Senegal whether this meant that the Senegalese authorities no longer intended to extradite Habré to Belgium or have him judged by their own courts, with the CAT continuing to impose its obligations on states parties. This aspect was, however, readily addressed by drawing attention to the very words of the African Union decision of 2006 which mandated Senegal “to prosecute and ensure that Hissène Habré is tried, on behalf of Africa, by a competent Senegalese court …” (para. 107) and the ICJ easily concludes the African Union referral cannot justify Senegal’s delays in complying with its CAT obligations (para. 112). (In her separate opinion, Judge Xue makes the additional point that the African Union decision may have been a contributing factor that accelerated Senegal’s process to amend its national law in 2007).

Another intervening factor of interest was the involvement of other international tribunals, both judicial and quasi-judicial. In May 2006, the United Nations Committee Against Torture came to the view in a related communication (petition) that Senegal had not adopted “such measures as may be necessary” to establish its jurisdiction over the crimes listed in the CAT, with a Committee rapporteur twice in 2011 reminding Senegal of its obligation to prosecute or extradite (para. 39). The ICJ, however, notes a certain lack of rigour on the part of the Committee Against Torture with respect to the temporal scope of the CAT obligations, concluding that Senegal’s obligation to prosecute does not apply to acts committed prior to the CAT’s entry into force in 1987 for Senegal (see para. 101) (with the separate opinion of Judge Cançado Trindade being critical of this passage, noting that the Committee had overruled the 1989 decision on which the ICJ relies).

As for the involvement of other international tribunals, in 2009, the African Court on Human and Peoples’ Rights ruled that it had no jurisdiction to rule on an application against Senegal aimed at securing the withdrawal of domestic proceedings, while in 2010, the Court of Justice of the Economic Community of West African States (ECOWAS) ruled on an application brought by Mr. Habré that reminded Senegal that it had to abide by the principles of res judiciata and non-retroactivity of criminal laws. The ECOWAS Court did, however, find that Habré could be tried before a special ad hoc international court or “special tribunal with an international character” to use the words of a subsequent African Union decision on the matter adopted in January 2011. A year later, in January 2012, the African Union noted that Rwanda was prepared to organize Mr. Habré’s trial, with Belgium throughout this time period, making repeated requests for Habré’s extradition. In any event, the ICJ has held that Senegal’s duty to comply with its obligations under CAT cannot be affected by the decision of the ECOWAS Court of Justice (para. 111).

Lastly, money has been featured as an intervening factor of sorts, with Senegal taking the position back in 2007 that the Habré trial would require substantial funds, having regard to such matters as the number of witnesses, the distance that witnesses would have to travel, and the difficulty of gathering evidence (as well as comparative experience elsewhere). Senegal’s position implied that a trial could not take place without the assistance of the international donor community, but by November 2010, significant funds had been raised, with Belgium itself contributing 1 million Euros to a total budget of 8.6 million Euros. In any event, the ICJ has concluded that “the financial difficulties raised by Senegal cannot justify the fact that it failed to initiate proceedings against Mr. Habré” (para. 112).

With an obligation to prosecute arising in 2000, when seven Chadian nationals resident in Chad filed a complaint against Mr. Habré with a senior investigating judge in Dakar, the ICJ has found Senegal in breach of its obligations under the CAT, whatever be the definition of a reasonable time. But in a separate declaration, Judge Owada raises a worthy point for future reflection with regards to viewing the CAT as a collection of independent international obligations, assessed separately and independently of each other, rather than a purposive approach that would view the CAT as a comprehensive legal framework for enforcing the principle of aut dedere aut judicare. 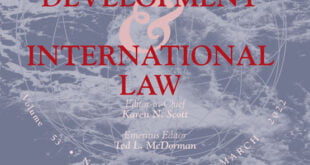