Irregular migration after the Aquarius incident: moving beyond the law. A reflection on Fink and Gombeer

Irregular migration after the Aquarius incident: moving beyond the law. A reflection on Fink and Gombeer

Last month, EJIL: Talk! published a piece by Fink and Gombeer on the legality of Italy and Malta’s recent failure to provide a safe haven to a rescue vessel Aquarius. Essentially, the authors concluded that the refusal by these states to open their harbours is ‘regrettable, at the very least, but not necessarily unlawful.’ On their view, for the reasons elaborated in their analysis, neither the law of the sea nor human rights law have been ‘evidently’ breached. It follows that these two branches of law, in the context of ‘Aquarius-like incidents’, provide rather no avail to asylum seekers; in other words: law has its own limits.

The fate of Aquarius and her passengers is yet another example of an endless list of scenarios where people from predominantly war-torn, repressed or impoverished territories often attempt to irregularly cross international borders; a large number of them seeking help, safety and a better life. This and similar events illustrate not only that the handling of the arrival of asylum seekers, especially in Europe, has fostered multiple crises, but also that irregular migration will not cease to occur. Hence, the need for a long-term, responsible and visionary solution is evident.

Fink and Gombeer reflect de lege lata, and their diagnosis is valid and all the more relevant nowadays, de lege ferenda, as the governance and management of migration is largely being reformed, on multiple levels, precisely to address contemporary challenges and expectations. Among others, the European Union (EU) attempts to reform its migration and asylum policy, predominantly the so-called Dublin system, and the United Nations (UN) is expected to adopt its Global Compact on Migration by late 2018.

Having read Fink and Gombeer’s analysis, we cannot help but reflect on their main conclusion in light of these reforms. These authors basically identify a ‘gap’: the law has its own limits. We, in turn, reflect further on filling the said ‘gap’. We ask what can be done to overcome the limitations of law in order to ensure more holistic protection of asylum seekers?

One of the solutions to these limits could be a recourse to the precepts and ideals at a higher level: namely, the foundational and fundamental values and principles on which a polity and its legal system have been built. This can be done by reflecting on ethics.

Ethics is a philosophical enterprise offering, in the words of Blackburn, ‘ideas about how to live’. It determines ‘what we find acceptable or unacceptable, […] it determines our conception of what is due to us, and what is due from us, as we relate to others’. Ethics has an ambition to be a supreme set of normative dispositions that defines the ‘standards of behaviour’, both for individuals and states, possibly running contrary to their interests or wishes.

Ethics involves a study of fundamental values – such as dignity, justice, freedom or tolerance – and offers a few approaches on how to decide on the right thing to do. In Western philosophy, four ethical stances dominate; let us illustrate them with the example of immigration. If those favourable of asylum seekers claim that accepting them is all about human dignity, they believe in duty, for instance to recognise this dignity and thus to help those in need (deontologists). Those believing in freedom would rather welcome anybody, as these people are entitled to do whatever they want with their life and property, provided they respect other people’s rights to do the same (libertarians). If those favourable of asylum seekers claim this would maximise overall good, they take a utilitarian stance, having ‘calculated’ the pros to outweigh the cons. Finally, those who follow virtue ethics (aretaic) would rather welcome an asylum seeker since this would be a benevolent thing to do.

In this context, to reflect on ethics means to ask elementary questions about both the contents and the practice of the law, and both lex lata and lex ferenda. Law always relates to ethics, law might be morally fallible and hence ethics could be used to criticise legal arrangements and demand change; the exact nature of this dynamics depends on a given legal doctrine (e.g. natural or positive law).

An ethical reflection would inquire as to the extent to which the contents of the law and legal practice conform to these fundamental values and principles. What constitutes a just government? Should a state take responsibility for the well-being of migrants? Should it strive only for the greater good for their own people (‘we’) or, rather, for the entire humankind (‘them’ too)? Should some sincere solidarity be shown towards fellow human beings? What constitutes a good cause for fleeing a collapsed homeland to be accepted in a host polity? Is a just government bound by a duty to help? Is it acceptable to refuse help to migrants? How much help is necessary? How much is sufficient? Is it acceptable not to rescue migrants at sea only because they have undertaken an illegal journey? Is a threat to national security or public order a valid reason to refuse migrants in a host polity? Ultimately, answers to these questions will depend on the chosen ethical stance.

Political systems in the majority of democratic states around the world chose a particular ethical stance. From the viewpoints of constitutionalism and constitutional law, these states have been largely built on the values and principles of democracy, the rule of law (Rechtsstaat) and the respect for human rights. These fundamental standards tend to be centred around the concept of dignity, originating in the Kantian, deontological imperative of human beings understood as ends in themselves and never as a means alone. Ethical choices had been made and then enshrined in their major legal and political texts. Hence, these choices have become guaranteed as the highest, legally binding normative dispositions, from the UN Covenants (‘… recognition of the inherent dignity … of all members of the human family’), to the Treaty on European Union (‘The Union is founded on the … respect for human dignity’) and the EU Charter of Fundamental Rights (‘Human dignity is inviolable’), to national constitutions and bills of rights (‘…the right to lead a life in conformity with human dignity’ in Belgium). As a further guarantee, national constitutional courts have been set up to verify the conformity of the law and legal practice with the values and principles enshrined at a higher level.

Public international law largely reflects these ethical choices too. In their analysis, Fink and Grombeer acknowledge that the law of the sea has recently been bolstered with the amended International Convention on Maritime Search and Rescue, now requiring rendering ‘assistance to persons in distress at sea’; a similar obligation can be found in other instruments of maritime law. Yet the recognition of human dignity in public international law is nowadays widespread and can be traced as early as early 20th century. Particularly, in the aftermath of World War II, with the emergence of the international criminal justice, from the Nuremberg Charter, to the Genocide Convention, to the Rome Statute and the International Criminal Court, the individual has become ‘the ultimate unit of all law … and the dignity of the individual human being [is] a matter of direct concern to international law’ (Lauterpacht). Further major developments followed, from the development of modern international humanitarian law, and of international and regional human rights instruments and tribunals, to multilateral treaties protecting specific individuals and groups, for example refugees or national minorities. Most recently, the UN World Summit 2005 accepted a broad political commitment for every state ‘to protect its populations from genocide, war crimes, ethnic cleansing and crimes against humanity’ (Responsibility to Protect).

Yet theory can differ from practice on at least two levels. First, de lege lata, law has its own limits. For what concerns migration, the fate of the Aquarius shows it is possible for states to turn away a ship with migrants on board. It is also possible to criminalise those that offer to ‘help an illegal immigrant claim asylum’ (Orbán’s latest move). Second, in parallel, the adherence to the ethical stance chosen often leaves much to be desired. It is enough to look at a few recent deeds of, for example, Francken or Salvini in Europe, or of Trump in the United States. Yet, as it was observed already in ancient Rome, ‘non omne quod licet honestum est’ (not all that is permitted is honest).

Europe and many other states have chosen a given ethical stance, having been built on the values and principles of democracy, the rule of law (Rechtsstaat) and the respect for human rights. This ethical stance not only has been spelled out in their highest legal and political texts, but this stance also exists beyond the letter of the law. If Kant, a deontologist, were asked what to do with the Aquarius, he would most probably say she and her passengers should be accepted in the closest harbour; a position that might be fulfilled nowadays with the fate of the Lifeline.

De lege lata, all international commitments to this ethical stance that were made in the last decades, and in particular the legal protection of human dignity, are rather profound and, more importantly, already ‘inescapable’ (Sands). However, as the fate of the Aquarius, and as Fink and Gombeer’s analysis show, still more is needed. A solution could emerge from ethics and, more precisely, from even ‘more ethics’, i.e. from a deliberate turn to a comprehensive reflection on ethics. The first and simplest example: de lege lata, Italy or Malta could have just accepted the vessel in their harbours, despite the law allowing them not to. (Eventually, it was Spain who did so.) De lege ferenda, the ethical choice of maritime law to respect human life and hence the explicit obligation therein to provide ‘assistance to persons in distress at sea’ could be adapted to the reality and needs of migration law for the benefit of any asylum seeker en route.

Yet such an ethical reflection is also needed beyond law and legal practice, especially given the recent examples of ignoring fundamental values and principles or instrumentally interpreting the law, even when human lives are at stake. As Mann already observed, ‘when all other law seems to fail, humanity is invoked as a last-resort normative commitment’.

Our text serves as yet another reminder that in order to stand on the chosen ethical ground, the governance and management of migration must fully adhere to the main values and principles, not only as enshrined in the law and legal practice – presently and in the future – but also beyond. In light of recent events and pending reforms sketched above, Fink and Gombeer’s diagnosis de lege lata is particularly relevant de lege ferenda.

The present analysis builds on our co-edited, with Elżbieta Kużelewska, volume ‘Irregular Migration as a Challenge for Democracy’ and in particular on our introduction thereto ‘Asking Big Questions: Migrants Ante Portas and What to Do with Them?’ (Intersentia: Cambridge, 2018). 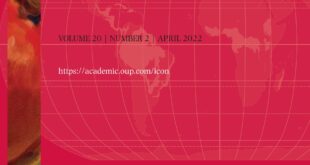